10 Features Of The Ideal Bathroom 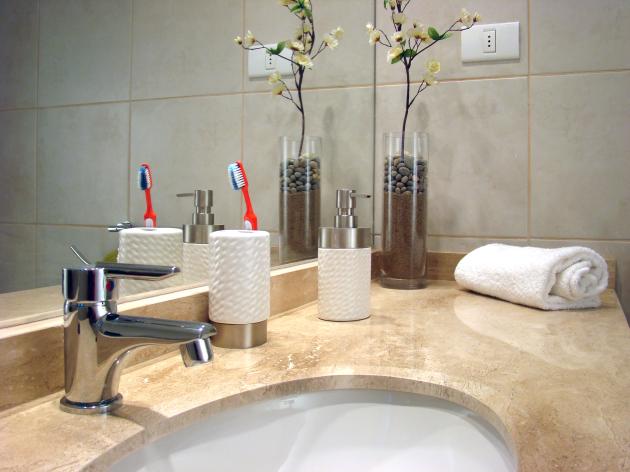 When making a big purchase – like a house or car – most people will undertake two searches. The first is with strict budget controls to see just what offers there are within their price range. Then, once the enthusiasm fades or curiosity starts to pique, the filters are giddily discarded to enable buyers to see what would be on offer, if money were no object.

“Look at this!” they’ll exclaim at million-pound seafront homes, 1,000bhp supercars or pieces of furniture with a price tag nearing the GDP of Malta.

These searches aren’t always ventures into the unattainable, though. Even the most luxurious of options can be attainable by simply getting creative or shopping around. As such, here are some of the more ideal bathroom features that might be top of many people’s lists, but not necessarily beyond them.

Where countertops are concerned, there is little more sought after than granite. Not only is it hard-wearing and easy to clean, granite is also by far one of the most professional-looking worktops on the market. By swapping plastics or ceramics with granite, you can single-handedly bring a bathroom right back into the 21st century.

All of this may make homeowners think it’s also then going to be expensive, but that may not necessarily be the case. After all, it can last for a very long time, so should be seen as an investment more than a simple purchase. Consider the ‘cost:years of use ratio’ and it can seem very reasonable indeed. Plus, there are alternatives such as quartz on offer for those considering a slightly different look or price.

Most people will want to flood their bathroom with natural light and what better way to do this than with a bay window? It may seem surprising, but seeing as bay windows provide much-needed natural light (whilst also offering additional space) they are a perfect fit. Whilst bays are most often seen as the sole preserve of living rooms or bedrooms, this certainly need not be the case. When used in bathrooms, they force the bath slightly further away from the window than normal, meaning it gets hit with light from all angles. Then, a few stained panels or decorative features can also ensure privacy is retained at all times.

Bathrooms are certainly the place to exercise your inner minimalist. Whilst it may not be entirely practical to have the shimmering almost-empty bathrooms of magazines (where would you put your shampoo?), there are ways of cutting down the clutter. One such way is to use under-floor heating, ensuring it stays plenty warm enough without lining the walls with countless radiators or towel rails.

This isn’t a solution that can be done in just an afternoon, but is still a real option for anyone thinking of a total refit.

Staying with the floor, ground level spotlights may not be the first option that comes to mind for bathroom wishlists, but anybody who has seen them in action quickly falls in love. In doing away with concentrated shafts of light from one or two overhead bulbs, these give a much more gentle and serene feel to a bathroom that is much easier on the eye in more ways than one.

Trends come and trends go, with the bathroom being no exception. The free-standing baths of old were once the only option people had, before being usurped by much more dense-looking units. Now, it’s gone full circle and old, vintage baths that were once seen only in skips now command a hefty fee. The good news, though, is that they are often made of cast iron, which means that even if the price is a bit steep, is should last long enough to make it worthwhile.

Now from retro baths to something decidedly more up-to-date. Jacuzzi baths may not be the newest invention, but they are certainly one of the most sought-after. Budget shoppers will have to make do with the retro-fit systems which can turn any old bath into makeshift jacuzzis, but the real ideal is for a much more in-built system.

Often being of the corner-bath design, jacuzzis can bring the luxury usually reserved for posh hotels into the everyday, whilst also being worth their weight in gold for anyone who exercises regularly or suffers with muscle issues.

Bathrooms aren’t just about the bath, of course, as the ideal shower can prove to be just as sought-after (if not more so, given the regularity of use). For this, a waterfall shower is among the most desired options, as it provides a much more immersive experience, if you’ll pardon the pun.

When making the change from a tiny shower head to a much larger panel, homeowners can see very quickly indeed just how the waterfall shower got its name. Not only that, superior models even have the capacity to release scents into the shower or even put on a soothing light show.

When sinking into a hot bath after the week from hell, most people will think “this can’t get any better”. To them we say, “how about a fireplace?” Certainly not the kind of feature that will work in uber-modern minimalist bathrooms, but for those with more country cottage-style tastes, fireplaces can take a bathroom from being just nice to inspiring awe among anyone who claps eyes on it.

Then, just imagine how toasty those towels will be after having been warmed by the fire.

Probably one of the cheapest options on this list, feature walls are a way of making bathrooms looks designed and professional, without needing to change the structure or rip it up and start again.

A popular option is to go for a nautical theme, with cream and blue stripes accentuating one wall and bringing out the matching accessories into one cohesive overall look. Pop an ornate-looking mirror on the feature wall and you’ll have something that looks like it is straight out of a magazine but without having outlays reaching thousands of pounds.

In years to come, people will be able to control their fridge freezer, heating or lights using wi-fi technology. This means you could pop the oven on to preheat before getting in from work at the touch of a button, or get the heating fired up to take the edge off without even getting out of bed.

This has also now reached bathrooms, even if they aren’t known for being phone or tablet-friendly. The result will be an ability to control bath temperature by the degree or to get the tub full before you even walk through the front door.

So whilst some of these may be pushing the boat out somewhat where expense is concerned, they make up the bathroom of many people’s dreams. But what’s wrong with having a look at the options out there, even if it would take a few saved pennies to get there? Plus, with a little thought, some of them aren’t quite as out of reach as they may first appear after all.